Shaun of the Dead R 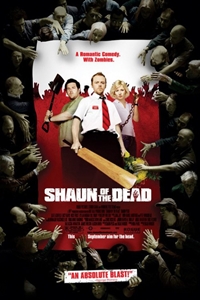 Shaun is in a rut. He's 29 and coasting through life. An aspiring DJ who long ago tucked away his record collection, Shaun works full time at a local electrical store with a staff of youngsters on their way to better things. His girlfriend Liz is rapidly outgrowing his aimlessness. On a Friday night, Shaun and Liz are down at the local pub with their friends. Shaun and Liz resolve to move forward in their relationship and go out for a romantic dinner the following evening. Their plans are upset, however, by an onslaught of zombies, which threaten to take over the city.